The best kinds of friendships are fierce lady friendships, where you aggressively believe in each other, defend each other, and believe the other deserves the world.

My amazing bestie, Aleta, sent me an almost equally amazing “I AM WOMAN” package just in time for Women’s History Month (WHM), and I’m looking forward to sharing a particular set of woman-centered art she included [later, when I feel like tackling the scanning].

Of course, I love all the goodies she included, but the affirming note she enclosed gave me life and an idea for WHM:

This note is a tiny reminder of how awesome a friend, mother, wife, professor, mentor, intellectual powerhouse, and fierce human being you are. Keep living, growing, believing, and pushing for more. It’s promised you!

Her note lit a fire because it came just when I needed that “tiny reminder” of my fierceness. I want to “pay it forward” to others, so along with [or in addition to] the few dozen International Women’s Day postcards I send, I’m going to send similar notes and postcards to many of the women in my life.

Women take a lot of “stuff” from all directions. It can sap our strength and our self-image, so it’s nice to be affirmed and reminded of how truly awesome we are.

Why don’t you join me? Send a quick, encouraging note to the women in your life. All it takes is a few words and a postage stamp.

If all the girls were taught
how to love each other fiercely
instead of
how to compete with each other
and hate their own bodies,
what a different
and beautiful world
we would live in

As I was fretting over today’s blog post, I received notification from Divya of Merry Motherhood that she nominated me for the Three Quotes in Three Days challenge. Quotes? Of course, I’m in!

The rules are pretty simple:

Thanks Divya! [Divya blogs about first-time motherhood among other things. You’ll love her Day 1 quote–straight from Calvin and Hobbes!]

This challenge is especially timely since I’ve been working on projects that involve integrating quotes for the last couple of weeks. Now, I have a reason to share a few of them immediately–instead of some time later.

Today, I’m sharing the photo and quote I shared for the “Fierce Woman” swap I blogged about a week ago.

When I blogged about Sally Ride two years ago, I asked readers for their favorite “fierce woman” quote. My blogging friend Sheila of Sheila’s Corner Studio responded with a quote by Georgia O’Keeffe that I knew I had to work into a photo:

I’ve been absolutely terrified every moment of my life – and I’ve never let it keep me from doing a single thing I wanted to do.  –Georgia O’Keeffe

The quote speaks to Sheila because:

[I] found that when I was in high school, and I have never forgotten it. I found it so hard to believe, and so reassuring. She was such a trailblazer, before her time. Since then, I have read about many extraordinary women who claim to have felt the same way. Yet, they have achieved great success.

I didn’t expect it to take me almost two years to use this quote. Part of the reason is that I didn’t want to use just any photo. I wanted to imitate O’Keeffe’s style with a photo edit. After many tries, I was satisfied. I think. 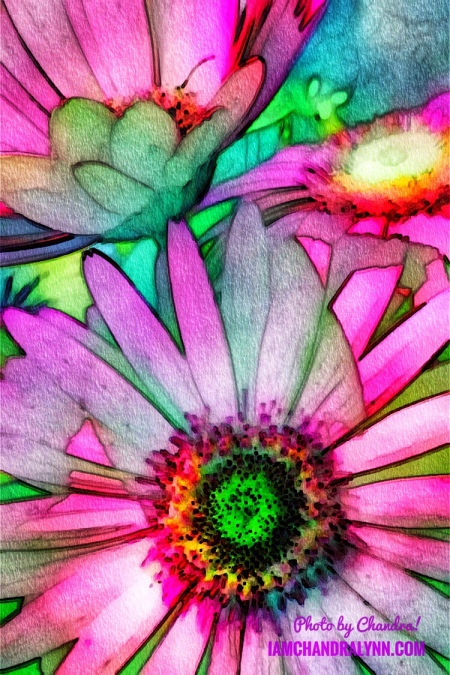 Here’s a link to some of O’Keeffe’s flowers.  How did I do?

The trick was placement of the quote. 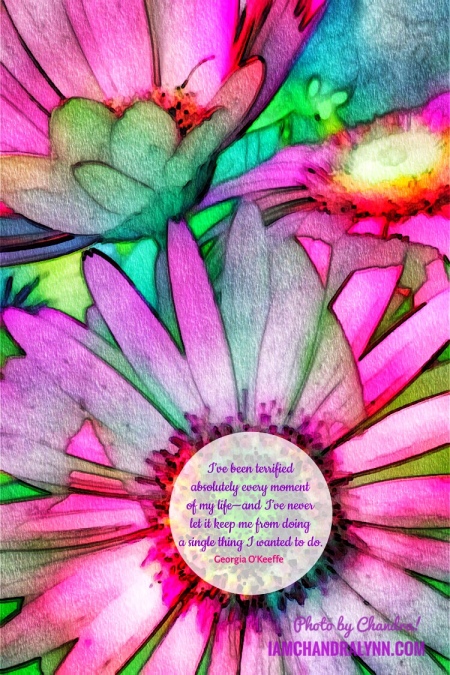 Unlike O’Keeffe, being “absolutely terrified” has hindered my conquering a few things. I’m not a complete “fraidy-cat” though. What I have done, I’ve pretty much done straight through the terror–which emboldens me to take on bigger, scarier ventures. As cliché as it sounds, “doing it afraid” takes real courage. In fact–as O’Keeffe’s words suggest–facing each day takes courage.

Be sure to tune in tomorrow for more inspiration!

Can you imagine walking through a fish market and encountering a woman who is so content, so fierce that her smile captivates you, even as she’s slinging a knife and her hands are covered in blood and guts?

When my photographer friend, Gale D, traveled to Mumbai some years ago, that is exactly who she encountered. The woman, “who was cutting baby sharks, had an incredible smile and a beauty that did not match her surroundings” or the task she had undertaken.

When she saw the description for the “Fierce Woman: Photo Inspiration” swap in the A Thousand Words group on swap-bot,  Gale knew she would use this image. The swap, just like the others I’d hosted in the past, required that individuals pair an inspirational quote by a woman with a complementary photograph. Gale felt Jennifer Lee’s quote captured the experience and the photo:

Be fearless in the pursuit of what sets your soul on fire.

This quote has been attributed (by some) to Lee, noted for directing Disney’s Frozen, but I haven’t been able to find any information on when and where she said this.

What I appreciate about the pairing of the photo with the quote is that it speaks against the usual narrative that our pursuits must be grand or lead to magnificent outcomes, that they must involve an encounter with and a conquering of our fears. The woman in the photo shows us that even the mundane moments of everyday life require fearlessness, passion, and fire.

Some time ago, I coordinated a “Fierce Woman” photo swap.  A fierce woman, for the purpose of the swap, was defined as: a mover and shaker in science, music, politics, history, art, dance, theatre, literature, activism (etc.) who inspires other women to strive for excellence.  Participants had to find a quote by a fierce woman and capture (or choose from their collection) a complementary photo.  Tynkerbelle aka Zoey aka Peppie, shared a shot from a launch at the Kennedy Space Center in Florida.  She appropriately paired the photo with a quote by Dr. Sally Ride (1951-2012) who was the first American woman in space (1983).

“All Adventures…” by Tynkerbelle aka Zoey Rayne aka Peppie Selders

Being a “wordsy” type of woman with a son who is both “wordsy” and “sciencey,” I have to keep up with space, astronauts, and a lot of other science stuff that usually holds my attention for only a few minutes at a time.  I enjoyed being able to share Zoey’s photo with him and teaching him about Dr. Ride, but I learned a little something myself.  While I knew Dr. Ride was a physicist and (of course) an astronaut, I did not realize that she also had an undergraduate degree in English.  Of course, that did my English professor heart a world of good! I tell students all the time that a degree in English can place them on the path to any career they desire.  Dr. Sally Ride is evidence–with a degree in English, one can soar!

All adventures, especially into new territory, are scary.

I keep the photo inspiration on my desk as a reminder that it is natural to be afraid when I venture into new territory, but I shouldn’t allow fear to keep me from moving in the direction of my dreams.

What’s your favorite “fierce woman” quote? Share it in the comments, and maybe, I’ll make some photo inspiration with “your” quote.