I woke up a week or so ago and typed the following note in my e-journal. I’d intended to flesh it out and clean it up, but sometimes, we need it straight. Even though it takes the shape of a poem, it is not a poem. Then again, maybe, it is. It is sad (perhaps?) and hopeful at the same time, but eh, such is life and the paradoxical state in which we all operate.

Achingly so at times.
Crippling even.

We must understand that.
We must get it through our thick skulls no one has it easy,
no matter how it looks on the outside.

There is no “life should not be this way.”
It is all life.

The sooner we get there in our thinking,
the sooner we will get to the part where we accept
“life” is always happening
and learn to find joy in spite of our circumstances.

The sooner we climb out of the oppressive pits of self-pity and despair
the sooner we begin to live,
and the sooner we will get to the part where we dance in the rain
and stand tall when everything around is crumbling.

I have told you these things, so that in me you may have peace. In this world you will have trouble. But take heart! I have overcome the world.  —John 16:33

My favorite season has begun! Let’s celebrate with gumbo and [despite what some of my NOLA folk say] pumpkin spice everything!

It is Agape Day, an annual day of service at my University, so the campus was quiet and virtually empty this morning. Since my service activity was scheduled for the afternoon, I took advantage of the solitude and took a nice walk through campus. I knew there would be photo-worthy scenes, but I intentionally left my camera behind. I wanted to just be without fiddling with camera settings and composition.

It had been far too long since my last “unhurried” tree walk. I stood in awe as the wind gently shook the leaves from trees and giggled inwardly as the shadows danced at my feet.

In the midst of the busy, the chaotic, the clamoring of all the things for time, attention, and energy, there is a subtle movement toward order, leisure, and rest.

I’m looking forward to the kinder pace that autumn brings and to that space of time when the days are short and the nights are long.

Time for my soul to exhale.

About the Image: This is my autumn fractal, entitled “Falling Leaves.” It represents all the things I felt today as I walked through the trees and watched the leaves dance and play all the way to the ground. I am joining Parul Thakur for #ThursdayTreeLove every second and fourth Thursday of the month. If you would like to play along, post a picture of a tree on your blog and link it back to her latest #treelove post.

This morning I awakened at my usual 5:00 a.m. with a bit of anxiety. I couldn’t pinpoint any major stressors, so I figured the culprit was the many tiny things on my mind—the lengthy task list, school (un)readiness, deadlines, projects up in the air.

Then, the words of Psalm 94:18-19 came to mind, and I knew I had to meditate and pray those very words. I doodled flowers, wrote the words beside them, and colored everything a cheerful red and yellow in my doodle journal.

A few hours later, to kill time (while waiting at the doctor’s office), I “fraxed” the [photo of the] doodle and words. The result–with scripture added:

May it provide what your soul needs today.

About five years ago, my friend, international poet and scholar, Dr. Jerry W. Ward, Jr., published a collection of poetry entitled Fractal Song. I have yet to speak with Ward about the title of the collection. I assumed it was connected to his interest (and degree) in mathematics. If you’ve been paying attention, you know my relationship with mathematics is an only-when-necessary one. For that reason, I gave the title and cover (which features a fractal) only cursory acknowledgment until I started playing around with my own fractal art.

The poems, which deal primarily with Black experience, possess cadences akin to traditional Black music forms–jazz and blues and maybe, even hip hop. At times, the words mimic the woeful whine of a saxophone, just grazing the deep ache of our longing. At other times, the poems hit the wry tone and rhythm of blues. Reality is matter-of-fact. We note it and we find ways to go on, laughing to keep from crying. Then, there is in some of the poems the flippant, unapologetic, unvarnished truth-telling, which makes hip hop so appealing.

The word fractal has its roots in the Latin fract-, “broken” from the verb “frangere,” which means to break. When I look closely at the fractals created from my photographs, I notice there is a slight break or opening that begins or disrupts (?) the pattern, so I’ve been thinking about the etymology of the word and how it impacts my reading of Ward’s poems.

There is much in Fractal Songs that opens and “breaks.” Traditional and experimental lines break. Time breaks as the poet traverses various historical and literary moments. And, certainly, there is his handling of much that is dark and broken in the African American (particularly) male experience.

Ward’s poems will not leave one feeling warm and fuzzy, as some expect when they encounter poetry. The poems in the collection are gritty and rugged. However, like fractals, there is artistry, beauty, and magic–even in the brokenness.

It’s a magic thing
Sun and rain and poetry
Flooding in my memory,
But all I can remember
Is how you got over
A deep river
With amazing grace
And cursed your blues
With natural rhythms.

Nature uses only the longest threads to weave her patterns, so that each small piece of her fabric reveals the organization of the entire tapestry.  –Richard P. Feynman

What do fractals and trees have in common? Well, according to the Reflective Educator:

The growth of trees is actually a fairly mathematical process that at least involves fractal theory, graph theory, and topology. You can actually generate very realistic looking trees using a computer.

While my fractal trees look very little like actual trees, they started as a photograph of a Southern Live Oak gloriously embellished with Spanish moss. I captured the tree last weekend just after we entered Louisiana for our very quick road trip to New Orleans (Yes! I finally saw my parents after 16+ months!).

I played around with one style and different looks. Here’s a “macro” version:

And a “micro” version of the same image:

Perhaps, if you look with a little imagination, you might be able to see the tree!

Thank you for stopping by last week as I shared a bit of visual inspiration.

If you’ve been following along for a while, you know that one of the ways I “decompress” is by picking up my camera (or phone) and shooting whatever speaks to me in the moment. I also wind down by playing around with photos in PhotoShop or various iPhone apps. This means I end up with far too many “interpretations” of the same image, and as much as I send out into the world or share here on Pics and Posts, way more than most never, ever have a life outside my computer or the cloud [I’m working on changing that].

The app I find most relaxing is Frax. My blogging friend Laurie of Color Poems introduced me to the app through fractals images she posted on her own blog just before Christmas a couple of years ago.

Even before I downloaded the app, I was hooked. The app uses mathematics to create beautiful, beautiful images. [Sorry I can’t be more eloquent, but math is eh…math]. Laurie explains it much better, so check out her post. I just want to unload (err…share) some of my “fractals.”

With Frax, users can play around with “already fraxed” images in the app library or they can use their own photos. I always use my own because I’m intrigued by the way photos transform. There are infinite possibilities in a single photo, and the motion of the artwork as it morphs in various ways is mesmerizing.

You can play around with texture and colors to get different effects for the same image/pattern, like the two below.

Or you can play around until your favorite color combination(s) jump out at you.

Sometimes, the image really surprises, like the heart I shared on Valentine’s Day this year.

I will be sharing fractals in my remaining two (or three) posts for the week. Be sure to stop by!

About the Images: Most of these were done almost two years ago, so my memory is not as sharp. If I am not mistaken, the first two images started out as roses (doesn’t the second one remind you of a perfectly ripened watermelon?); the third image started out as a sunflower; the fourth and fifth images started out as a Christmas ornament. I have no recollection of the final two images’ origins. I should probably do a better job at keeping up with my frax art. Probably. 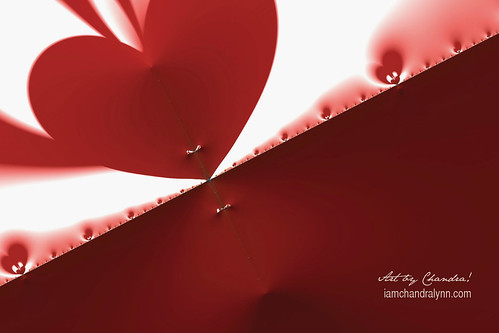 Out of the depths of a heart of love,
Out of the birth-place of sighs,
Freighted with hope and freighted with fear,
My all in a valentine, hies.
Oh, frail little missive
Of delicate texture,
Speed thee, on thy journey,
And give her a lecture!

Fathom her heart, that seems to me, cold,
Trouble her bosom, as mine,
Let it be mutual, this that I crave,
Her ‘yes’ for a valentine.
Oh, frail little missive,
In coy Cupid’s keeping,
Oh! speed back a message,
To set my pulse leaping.

Focus on Black: Click the link and learn a bit about Priscilla Jane Thompson.